Saturday 9: Thank U, Next 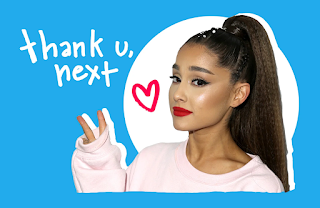 Unfamiliar with this week's tune? Hear it here.
1) In this song, Ariana Grande thanks her former boyfriends for what they taught her about love, life, patience and pain. Do you believe you have learned more from your successes, or your mistakes?  It's probably about evenly split. There is plenty to be learned from both situations.
2) One of the young men mentioned in the song is Pete Davidson, a cast member of Saturday Night Live. SNL has been on for more than 45 years now. Who is your all-time favorite cast member?  Wow. Eddie Murphy and Dana Garvey were great, but I like the original cast best of all and I don't know that I can choose a favorite between Dan Akroyd, Bill Murray, John Belushi, Chevy Chase, and Gilda Radner.
3) Thinking of funny people ... As you can see from the video, Ariana performed "Thank U, Next" on Ellen Degeneres' talk show. Ellen makes people laugh every afternoon. Who in your life can you always count on to make you laugh or smile?  My hubby, my granddaughter (she is turning into such a character), and my friend Fran.
4) It looks like Ariana Grande's personal romantic saga will have a happy ending because at Christmastime, she announced her engagement. Do you know anyone who is getting married in 2021?  I think, maybe, the daughter of friends of ours. She was supposed to get married last June and they put it off, of course. There was talk of them getting married at the courthouse and then having the big shindig this summer. I don't know if they are still going with that or not. It's still kind of hard to plan that sort of thing.

5) Ariana loves Harry Potter and named her dogs Snape, Lily and Sirius Black after characters in the J.K. Rowling books. Are you a Harry Potter fan?  Nope. I've never read a single book or watched a single movie. I don't have anything against them...just not my thing.
6) She loves board games, especially Monopoly. Sam isn't crazy about Monopoly because it takes so long. How about you? Are you a Monopoly fan?  Not of regular Monopoly and for the same reason as Sam. I did like playing Monopoly Jr. with my kids. It only took about 30 minutes to play. A couple of years ago someone got me a Big Bang Theory edition and that was really fun to play. It doesn't take too terribly long. I bought myself a new Monopoly this year. I couldn't resist. The Jeff Foxworthy edition. You have cabins and trailers instead of houses and hotels. The game pieces include a lawn flamingo, a chainsaw, a ball cap, a mounted fish, a deer, and a racecar up on blocks. We haven't played it yet, but I'm sure it will be funny to play. 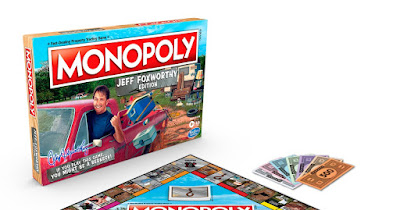 7) In 2018, the year this song was released, Toys R Us closed all its stores and went out of business. Who received the last toy you purchased? What was it?  It would have been the grandchildren at Christmas, but it would be impossible to tell you who got the last one purchased or what it was without using more brain power than I'm up to this close to bedtime.
8) Also in 2018, Aretha Franklin died. What's your favorite Aretha song?  Maybe Chain of Fools or maybe Respect.

9) Random question: Are you more likely to shed a tear at a wedding or during a movie?  It totally depends on who is getting married or what movie I'm watching.

Thanks, as always, to Sam @ Saturday 9 for the questions and the music.

The weather... is kind of a mess. I woke up to a layer of frozen sleet on the ground and a light rain. The forecast is for a high of 41 de...