Saturday 9: Don't Get Around Much Anymore 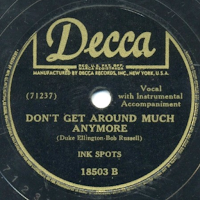 1) In this song, our lonely Romeo shares how he amuses himself these days. Which of the activities that he mentions have you most recently enjoyed: playing solitaire, reading a book, or listening to the radio?  Reading a book.

2) The lead singer is tenor Bill Kenny. Which range is your voice: soprano, alto, tenor or bass?  I can't sing worth a lick so I have no idea, for sure. I'd guess alto, but I'll never sing in front of anyone who would know.

3) When Bill was on vacation in Atlantic City, he entered a series of talent contests and won 21 of 22. This led to his first professional booking. Tell us about a vacation of yours that took an unexpected turn.  I can't think of anything. I tend to plan vacations out fairly well.

4) This song was composed by Duke Ellington. He received many honors, including a coin struck in his honor. In 2009, he graced the District of Columbia's commemorative quarter. Do you save coins in a jar or piggy bank?  A jar.

5) In 1976, Stevie Wonder recorded a tribute to Ellington called "Sir Duke." What's your favorite Stevie Wonder song?  Superstition or You Are the Sunshine of My Life

6) The lyrics were written by Bob Russell. When he began his career, he shared an apartment with future novelist and TV screenwriter Sidney Sheldon. Have you ever tried your hand at writing lyrics, a novel or a screenplay?  We messed around as kids trying to write lyrics and I used to dream about being a novelist, but I didn't pursue either seriously.

7) In 1942, when this record was released, the federal government established a rationing system to conserve crucial supplies for our troops. Sugar was the first food to be rationed, followed by coffee and then meat. If you were around back then, which of those items do you think you'd miss the most?  Definitely meat, then sugar. I wouldn't miss coffee at all. You may send all of mine to the soldiers!

9) Random question -- Have you ever deliberately lost a game?  Probably playing with a young child, but otherwise, no. I'm sort of competitive.

Thanks to Crazy Sam @ Saturday 9 for the music and the questions.