Okay, I'm going to take a chance and play along with Sam and the gang at the Saturday 9, but don't hate me if I don't get around to visit everyone...or anyone. Ever since our daughter used my laptop on Thursday to download a resume for someone, it has been torturously slow. I have a feeling a trip to the repair shop is in the immediate future.

Cross your fingers I can get through this! 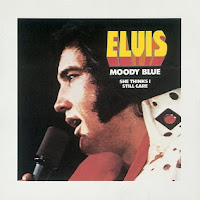 1) This song was recorded in the special studio Elvis had built in the Jungle Room of Graceland. During the pandemic, have you made like Elvis and worked from home?  No. For the first year and a half I didn't work. The job I have now is not one I'm able to do from home, though I do bring one client to spend time at the house.

2) Elvis sings that his girl is completely unpredictable. Which quality to you find more attractive: spontaneity or dependability?  It's good to be able to be spontaneous and fun, but flying by the seat of one's pants all the time would get old rather quickly, I think. In the long run, I'd rather have someone I can depend on.

3) He only performed the song once in concert. In February 1977, shortly after the record was released, Elvis sang "Moody Blue" live in Charlotte, NC, but had to rely on lyric sheet. Crazy Sam can sympathize because she seems to forget passwords as soon as she sets them. Do you often struggle with your memory?  Mostly just when it comes to names. I've never been good at remembering names and now that I'm closing in on 60 I've noticed it's worse than ever. And it's very annoying.

4) "Moody Blue" was the final hit of Elvis' lifetime, only getting to #31 in the US but reaching #3 in the UK. What's your favorite Elvis song?  It's a tie between

5) We're focusing on Elvis this week because January 8 would be his 87th birthday. He enjoyed celebrating his birthday by renting the Memphis movie theater and watching the latest movie with an invited group of friends. What's your favorite way to celebrate your birthday?  Hmm...I don't know. My family wasn't one for making a big deal of birthdays and I don't think Tim's was, either, because doesn't pay much attention. Dinner with friends and family or going somewhere would be good, I think.

6) For his 11th birthday, young Elvis asked for a rifle or a bicycle. His mother deemed the gun too dangerous and the bike too expensive and instead gave her son his first guitar. Tell us about a memorable birthday from your youth.  The only one I remember was the white and lime green Schwin Stingray bike I got for my 7th birthday. It had the high handlebars, a sparkly green banana seat, and sparkly white and green streamers on the handlebars. I loved that bike! I have tried to find a picture of it online, but have never found anything close. It must have been some sort of special edition or promotional thing because it was not part of Schwin's regular line.

7) Elvis loved horses and kept them in the stable at Graceland. His favorite was a palomino named Rising Sun. To honor both horse and rider, Elvis' daughter has always kept a palomino in the stable whose name includes "sun." The current resident is Tuscan Sun. Known as "Tucky," he's lived at Graceland for more than 20 years now and is a favorite of Alene Alexander, who maintains the stable and reports he has "attitude and knows he's prettier than everybody else." Tell us about an animal who holds a place in your heart.  While I love our current pets, Daisy and Jasper, the one who will always be the one was our Beagle/Basset Hound mix, Elvis ('cause he wasn't nothing but a hound dog). There was something special about him. He had such a calming, comforting effect on everyone. If we had known what to do, he would have been an amazing therapy dog. I know I cried gallons of tears on his soft ears and our daughter credits his presence with keeping her from totally giving in to despair during her late teens and early 20's. I agree that he did. We were devastated when we lost him. 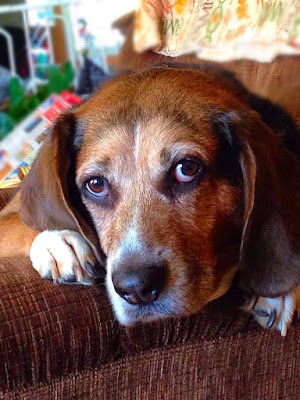 8) Throughout his life, Elvis had trouble sleeping. As a preteen, he was a sleepwalker. As an adult, he battled insomnia. Is sleep an issue for you?  It never used to be, but for the last 10 years or so it's been rare that I sleep more than 6 hours a night. It doesn't matter how tired I am, I just can't sleep longer. In the last 2-3 years I've started having trouble falling asleep to begin with and usually take a sleeping pill that sometimes helps, sometimes doesn't.

9) Random question: Do you wear your shoes in the house?  No. I always wear slippers in the house. To my dismay my husband tends to wear his work boots in the house if he's going to be in and out rather than tying and untying them. It's an annoyance...especially during wet, muddy seasons.