Good morning! I'm getting a late start today because I had to go to Walmart first to pick up the CD I had made of the photos I took over the weekend. I thought there were going to be more problems because the girl working couldn't find my order. It, thankfully, turned out to be one of those cases where she just couldn't see it. A fresh set of eyes spotted it right away. Back here at home it took some finagling to get them uploaded, but uploaded they are and you'll be seeing them shortly.

To get started today, I'm joining in with Annie for the Tuesday 4. We're talking about the Fourth of July.

1. Do you think the 4th is an important holiday? Why, why not?  Absolutely! It's important to remember what our ancestors and forefathers went through to birth this nation. It's important, now more than ever, not to lose the lessons of our history. It's also important to celebrate as a nation and foster those feelings of being a part of something bigger than we are.
2. How do you celebrate? If you are not American, do you celebrate your nation's national holiday?  I'm an American and was raised to be deeply patriotic. All of my ancestors have been here from either the beginning or very close to it. I am descended from John and Priscilla Alden who arrived on the Mayflower. Other ancestors were not far behind. On "normal" years our town has a huge week-long celebration and we enjoy many parts of it...the parade, the carnival, the fireworks, etc. This year with none of those options available, we are simply having a family picnic, minus our son's family as they will be on vacation. With a little luck, we may be able to swim! The pool guy called yesterday to tell us the guy who does his excavation work was all tied up. So, Tim has someone he knows coming today or tomorrow to do that and then, hopefully, the pool guy will come right away.
3. In the time of Laura Ingals Wilder,  all Americans read the Declaration of Independence every year on the 4th and lemonade was a big treat for the town picnic. Do you read the Declaration of Independence? Or, your nations important papers? How about lemonade? Are you a fan?  No, we don't read the Declaration of Independence here at home...but maybe we all should. If more of us did, maybe, as a country we wouldn't be in such bad shape right now. Lemonade...eh. I can take it or leave it.
4. Picnic, eat inside the house or eat out for the 4th?  Outside, of course!


And now on to what you've all been waiting for!

Tim and I left home around 8:00 Saturday morning, heading to what was possibly the most long awaiting meeting in the history of ever! At the age of 55 (56 in August) I was on my way to meet my biological father for the first time. We took our time and enjoyed the scenery on the drive and stopped at the Market House in Meadville where I purchased a loaf of homemade bread and jars of honey and jam as a thank you gift for my father and his wife having us stay with them.

We arrived around noon and everyone was a little nervous, a little awkward, but anxious to get to know one another. We talked so much that we didn't have lunch until 3:00! After lunch we went for a drive. It was good to see the places I knew from living there and then later visiting my grandparents and of course, it was really interesting to see all the places my newly discovered ancestors had lived and farmed. There were so many of them at one time that I couldn't believe I'd never heard the family name. Maybe my family took special care to make sure that I didn't? We also visited the cemeteries and saw all of the grandparents' resting places. 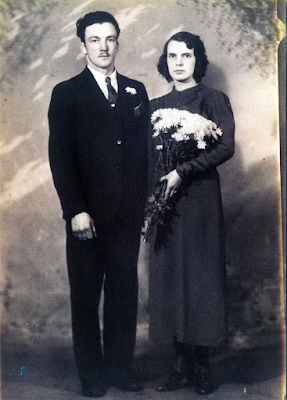 My grandparents and their graves. They died many years apart as William
went hunting in 1951 and didn't come out of the woods. Nobody seems to talk about it
but I've heard hints that something wasn't quite right. Suicide? Murder? Accident? 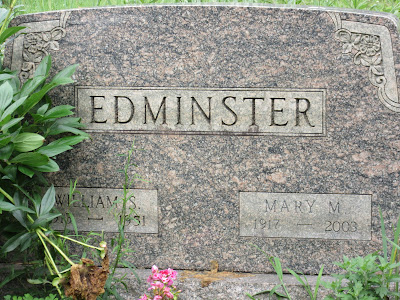 There was time to walk around and explore when we got back to their home. The road where my father lives is almost completely populated by the Amish. He sold them his family's home several years ago and then more recently sold them all of his land. He kept life-rights for the land they live on, which is way back in the woods (though it used to be pasture) and the mobile home they live in when they are there (only a couple of months out of the year) sits right on the edge of a big pond. A graceful heron flew in to entertain us while we sat on the deck. 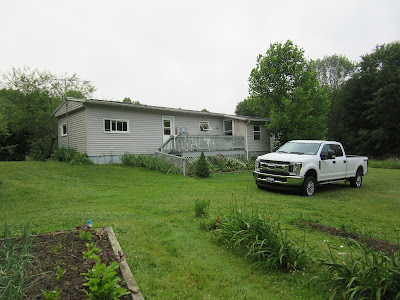 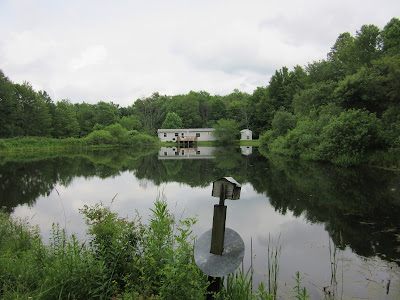 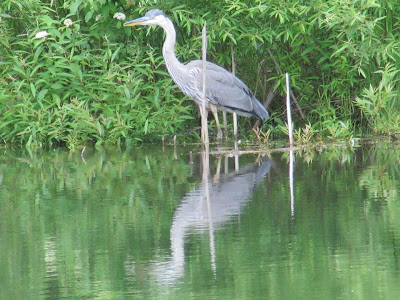 Just to show how close the house actually sits to the water.
That window on the end is in the bedroom we were in. There
are windows on three sides of the room and we slept with them
open, but wow...what a racket! On the land side we listened to
the tree frogs sing all night and on the water side a big old
bullfrog croaked out his love song to the ladies all night. 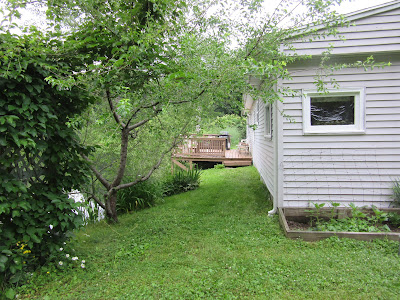 It was after we walked around and before we ate, that we finally sat down and talked about some of the hard stuff. I learned a few things that are going to remain untold just in case my mom ever finds and reads my blog. Some things back then were not as my grandfather told her. I imagine he thought he was doing what was best for her and me at the time, but I also think it explains what he meant when he once told me "Someday you're going to find out that I'm not all that great."

So...my impressions of my father. It was a good meeting, a bit anticlimactic in a way. On Sunday, I had that feeling you get the day after Christmas...the let down after weeks of build up and excitement. And I had nearly 56 years to build this up!

After all the wondering and imagining, the truth is he's just a regular guy. Granted, he's got some pretty far out there (from my point of view) ways of looking at things. He's definitely a man of contrasts. He's very cerebral, but also very earthy in a sort of hippy kind of way. He doesn't believe in God, but he references Bible stories. He's kind of self-centered in that he turns most conversations to himself (I had been warned about that in advance) and his own adventures and he likes to go on and on about them. On the other hand, he's very generous and willing to share. He allows the Amish boys to come and go at will to fish in the pond and when he and his wife are in Texas they know the boys go in and out of their house, listen to their radio out on the deck, and watch their TV. He's okay with it as long as they don't damage anything or steal anything. For all of his liberal views, the thing that surprised me the most was his complete lack of political correctness. The bottom line is, I guess, that he values knowledge above all and if he comes close to having a god, it's that. 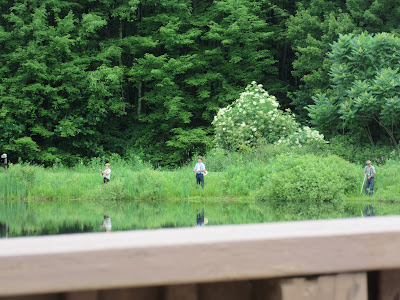 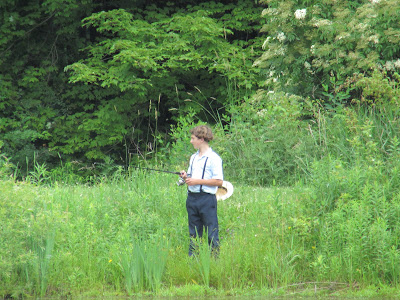 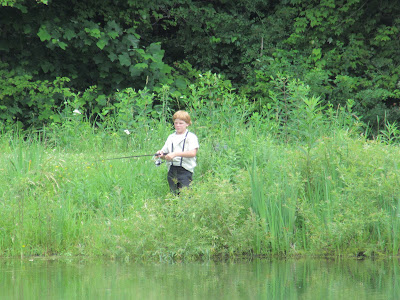 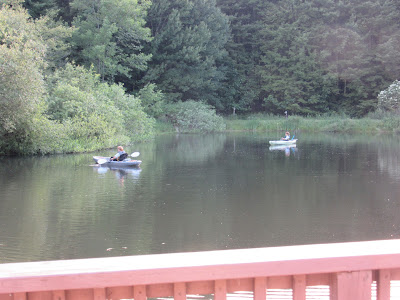 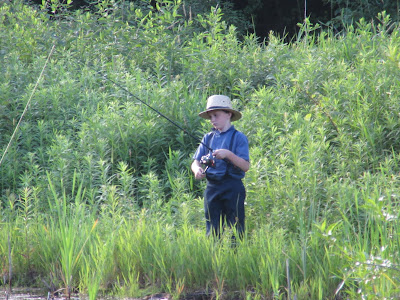 So, it was a good meeting. A few questions got answered. There was no "Wow!" moment, no overwhelming emotion. He's just a guy who happens to be my biological father. I do hope to have some type of relationship with him going forward, though I know it won't be a typical father/daughter one. To be honest, I get the impression my siblings aren't particularly close to him. They were young when their parents divorced and he has moved around a lot. Even now, he's in Texas most of the year, in PA for the summer, and part of August he will be in Maine (where his wife is from). His wife, by the way, is a very nice lady. She's had a few strokes and doesn't speak well, moves slowly, and sometimes does things wrong (like carry a big knife by the blade), but once we got the hang of her speech Tim and I both really liked her. 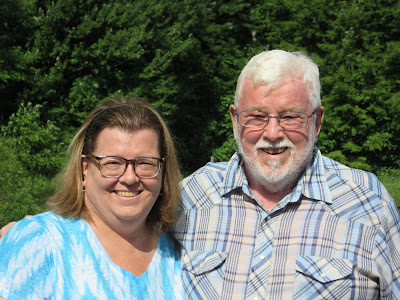 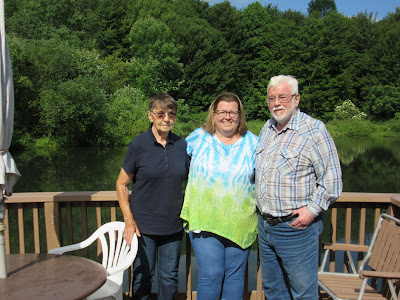 I'm sure we'll keep in touch and I will be seeing him again in a couple of weeks as I pursue a relationship with the eldest of my half-brothers. He will be visiting the week of July 13 and Megan, the kids and I are going to drive up on the 15th to meet him and his family and to give Megan and my father a chance to meet. I'll be missing out on seeing my sister over the 4th because of family commitments here, but she and I text and write fairly often. I guess the other brother is sort of estranged from the family so I don't know if I'll get to meet him. Maybe by next summer the world won't be such a mess and the family reunion will get to go on. That would be something...to meet all the aunts, uncles and cousins.
**UPDATE** I very literally received a call right after posting this from my sister. Our father is in the hospital after experiencing some "tingling" in his arm last night. They are running tests now and she will let me know what happens. She was quick to assure me she didn't believe it had anything to do with stress or excitement from our meeting. He's had a heart attack in the past, heart surgery, a pacemaker, and a colostomy that's been reversed.
Posted by Stacy at 12:29 PM