The Weather...is a cloudy 83 degrees and humid.

Reading...Antiques Flee Market: A Trash 'n' Treasures Mystery by Barbara Allan. It's cute. I picked up 3 books in the series at Goodwill back when my mom first had her knee replacement done. She read them and passed them back to me.

Watching...Hope Island on Pure Flix (though technically I just finished watching...and darn, there's only one season), Buying Alaska on Discovery+, and The Upshaws on Netflix.

In the kitchen...country-style ribs seasoned with a dry rub and covered in a sauce made from Sweet Baby Ray's barbecue sauce and honey are doing their thing in the crockpot. I will probably make roasted potato wedges and biscuits to go with them. Maybe throw on some baked beans, too.

A Jurassic adventure with Megan and the kids. 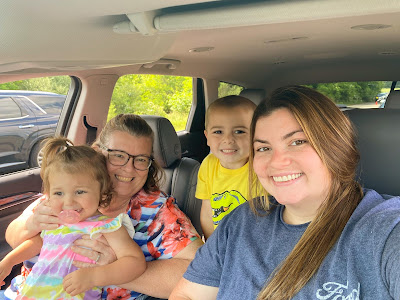 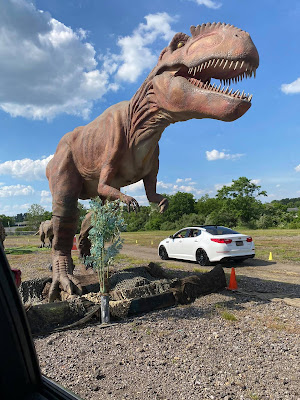 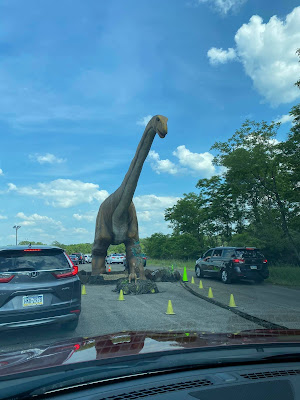 One of Pittsburgh's big concert venues has opened up for Jurassic Quest on the weekends this month. At $49/car load, it was a bargain and the kiddos loved it. The only down side was 2 hours to get there and 2 hours to get home. Leah was well and truly over being stuck in her car seat.

Tim worked outside all day yesterday in the 90 degree heat. Colton helped him some of the time, but would get tired of the heat and come inside for a while. Tim was working on getting the pool pump running well and getting the water cleared up and balanced...while also digging post holes, setting the posts and starting to build the pool deck.

I went to church in the morning. One of the elders spoke yesterday and had a good message asking "Are you saved or are you surrendered?" He talked about how everyone who accepts Jesus's life, death, and resurrection as paying the cost for their own sin has salvation, but sadly, not all live a surrendered life. Some surrender more than others, but a dismally small percentage of Christians totally surrender EVERYTHING, every single area and detail of their lives to his leadership. Most of us have that one thing we don't want to give up control of. It may be a biggie or just a little thing, but it remains clutched in our hands. And that is not what God wants from us. He wants it ALL! Lots of food for thought there.

I finally got to meet the pastor's wife. She is supposed to text me at some point to make plans for me to have lunch with them. They asked about Tim and I having dinner with them and another couple or two, but Tim said no.

Leah and I went to Walmart for a few groceries in the afternoon.

The job...is still slow going. I have another client to contact today to set up an appointment. I guess the agency is waiting to see how many hours that gives me before giving me anything else. They are promising me I will get 29 hours per week. I have to work that for 3 months to get half the sign-on bonus and six months for the second half. After that if I want to work less hours I can.

Today's agenda...got blown out of the water. Megan had to take her vehicle to the garage for some repairs (we were hit from behind a couple of weeks ago while out shopping) and they gave her a minivan to drive. Colton was so excited about it that he insisted they call me and go for a ride. We ended up going to Walmart, taking a long drive, and then stopping at a Goodwill in another town before finally heading home. Oh well, I'm in sort of a blah mood today so I'm kidding myself that I would have gotten a lot done if not for that.

Things are going to cool down around here this week again. Not chilly, but back into the 70s and rain or thunderstorms are being called for every day. Not much sun, either. Just clouds, clouds, and more clouds. It's a way of life here. A few years ago we passed Seattle for the least amount of sunny days in a year. I wouldn't be surprised if we've held on to the title. Anyway, it was a given with the pool being just about ready to open. Maybe we will get lucky and August won't be cool and rainy this year.

Well, I am off to salvage some of my day and get a few things done before Tim comes home. Happy Monday! Have a blessed week!

Wow! Can you believe we've come to the last Thankful Thursday of July? Is it just me, or is this summer flying by...even though I'v... 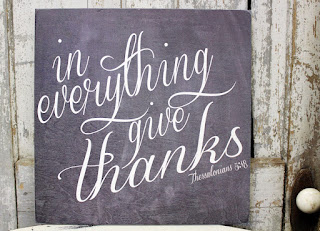