Saturday 9: I'm the Only One 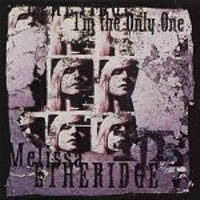 Join the fun here. Thanks to Sam for the music and questions.

1) Melissa Etheridge sings this song as though her heart is breaking. What's your favorite love song? Is it about falling in love, being in love, or losing love? I am not typically drawn to "love songs", but I absolutely adore the entire soundtrack to 1998's Parent Trap, which ranks in my top 5 most romantic movies of all time. I can't choose just one so here are a few.

2) "I'm the Only One" is a favorite song of American Idol contestants, having been performed four different times. If we were to have a Saturday 9 karaoke night, what song would you do?  Yikes! Since anything I sing sounds like the caterwauling of an anxiety ridden cat, I wouldn't be participating. However, if my fairy godmother showed up and gave me a decent voice, I'd probably do something fun for everyone to sing along with like one of these.

Wagon Wheel by Darius Rucker
Piano Man by Billy Joel
3) A rocker at heart, Melissa Etheridge began her career in her teen years, playing with local country groups. Which do you enjoy more: country or rock?  I'm not locked into any one genre. I enjoy all kinds of music and move in and out of phases where I'm more in the mood for one than the other.

4) In 1985, Melissa sent a demo to Olivia Records, hoping for a record deal. She was rejected. Her debut CD was released in 1988 on the Island label and went gold. Tell us about a time you bounced back from professional adversity.  My boss at the nursing home was absolutely dreadful. I loved the job, but could not deal with her constant criticisms and put downs. I tried dropping back to part time hours so I would only have to work in the memory care unit and not see her, but then the home had financial problems and the pandemic came along and that wasn't going to remain the case...so I left. I took a little over a year off and now I have a fun job that I love. **Just to note, I recently learned the woman was fired.

5) In her personal life, Melissa has faced major challenges, including breast cancer and the death of her son. She credits music with helping her heal emotionally. What gives you strength?  My relationship with God through Jesus Christ.

6) Melissa is a vegetarian, so her diet emphasizes plant-based foods like fruits, grains, nuts and vegetables. What was your most recent meal? Would it qualify as vegetarian?  No vegetarians here, though sometimes in the summer when produce is fresh I will make a meat-free meal. Last night's meal was beef rice with ground beef, mushrooms, and a few veggies thrown in.

7) In 1993, the year this song was popular, a massive storm dropped a record 56" of snow in Mount Le Conte, TN. Have you done much shoveling this winter?  Not too much. We've only had one big snow so far. I remember the winter of '92-'93. We got hit hard here. Everyone talks about the blizzard of '93, but we were hit worse a few months earlier in December of '92. My town made the national news as the epicenter of a "perfect storm." We got more than 3 feet of snow in less than 24 hours. My husband was at work and his employer sent a crew and machines to help dig the town out. He didn't come home for 3 days. There was so much snow there was no place to put it. They had to put it in big trucks and haul it away to dump. Thankfully, our power stayed on because I was stranded at home with a 6 year old and a 4 month old baby.

8) One of the most popular movies of 1993 was A Few Good Men, starring Tom Cruise, Demi Moore and Jack Nicholson, who famously said, "You can't handle the truth!" What's the most recent movie you watched?  At the theater it was the new Spiderman movie with a client. At home it was Olympus Has Fallen which is one of Tim's favorites.